Shroud was a memento mori[1] installation exploring material fluidity and the earthly repatriation of matter. A burial shroud adorned with a Hellenic-inspired mosaic emblema featuring native plant forms hovered close to the ground, and nearby, a video with almost imperceptible movement showed an Australian bush cemetery. The mosaic was, with the exception of the Venetian gold leaf, made using intentionally biodegradable tesserae. The predominant tesserae were made using wood ash, bound using PVA and latex inspired by the 1st century CE mosaic border remnant reputedly removed from the Doves of Pliny mosaic.

The centrepiece of this installation is the artist’s[2] intended burial shroud. This work is flanked by a silent video still of the artist’s planned grave site, plot 949 in Vaughan Cemetery, in the former goldfields of central Victoria.

Shroud is both about concealment and the vitality of matter. In the first instance, the obfuscation of historical truths through material dislocation and post-mortem bodily concealment as a form of comfort and nurturing; the latter’s swaddling in death akin to the swaddling of a newborn. Just as I recall my own incredulous experience of drinking in the scent of my newborn for the first time, and associating her exquisite vernix aroma with something resembling the scent of ‘sweet, damp earth’[3], so too, this bodily swaddling and the olfactory characteristic of sweet, damp earth anticipates the greater, final corporeal encasement upon the eventual burial of my own body.

The second, vital matter implication of Shroud is encapsulated in the biodegradability of both the purpose-made ‘green burial’ bamboo shroud and its mosaic adornment. The shroud’s detailed mosaic depicts as a binary motif, a rare and environmentally threatened species of local orchid; the Caladenia clavescens[4] which occurs only in a narrow habitat within central Victoria, including Vaughan cemetery. Contoured with gold leaf smalti, the two orchids are designed to wrap and encircle the body, against a background double sheaf of Themedia triandra or kangaroo grass[5].

While the orchids echo the fecund characteristic of the central lily in the original 1st century CE Hellenic border fragment, the kangaroo grass motif echoes that of the palm[6] leitmotif symbolising victory. The mixed media, ‘vital matter’ tesserae in Shroud feature a range of biodegradable plant-based elements; primarily wood-ash and human hair with water soluble binders including latex, and local Yapeen slate quarried by the artist. In this way, the apparently endless cycling of vital materiality is celebrated as a victorious affirmation – over the yuck factor of death and putrefaction – through the use of intentionally biodegradable elements, and gold.

The high commercial and cultural value of gold has lasted cross-culturally and for millennia, yet this deliberate disposal of gold-leaf tesserae through the interment of high value material also echoes the funereal rituals in which valuable objects reflecting the identity of the deceased were interred with them, to accompany them to the afterlife. It is also a gesture made for a more distant future; perhaps when Vaughan cemetery is no longer a place of burial, or when tectonic or other elemental changes alter the topography of the site; loosening and freeing the tesserae from their place of interment, for their accidental excavation or incidental re-finding in another time and place. But most significantly, the inclusion of gold tesserae entails the repatriation of primary material excavated and removed from Vaughan, from the 1850s Gold Rush until the present.

Just as Cicero’s villa which housed the Menander’s comedy Theophoroumene (The Possessed Girl, early 1st century CE) mosaic[7] was an allegorical expression of its owner, Shroud – speculatively also a home of sorts – is a temporal self-portrait; an extension of my personal memory and a cultural metaphor for myself. This ontological work affirms my deeply personal relationship with a particular place, for which have a profound affinity, and a particular time. These are the natural environment of Vaughan, where surrounded by the Castlemaine Diggings National Heritage Park I have lived for most of the last 13 years. The catalysing moment for the fulfilment of Shroud’s future agential path will be the expiration of my life, as I know it.

Shroud is a fundamentally temporal work, speculatively intended on the post-mortem autolysis or ‘self-digestion’[8] of my body, to entail the material dissolution of the shroud and its mosaic emblema, and the return of its gold to the ground. This act of material repatriation through bodily liquefaction will be a final deliberate expression to affirm the vitality of all matter and to celebrate the inter-relationships of body with material. The work equally celebrates the act of making and the act of un-making; the latter in the nascence of an afterlife in a small central Victorian bush cemetery, dotted occasionally with fleeting outcrops of Caladenia clavescens and Themedia triandra.

[3]  I have never forgotten either the sensation or the association I described then as ‘sweet, damp earth’.

[4] Caladenia clavescens is ‘listed as “vulnerable” and is protected under the Flora and Fauna Guarantee Act 1988’. https://en.wikipedia.org/wiki/Caladenia_clavescens

[8] ‘Bodies are, after all, merely forms of energy, trapped in lumps of matter waiting to be released into the wider universe’. Moheb Constandi, ‘This is what happens after you die’, Mosaic Science, 5 May 2015. https://mosaicscience.com/story/what-happens-after-you-die/ 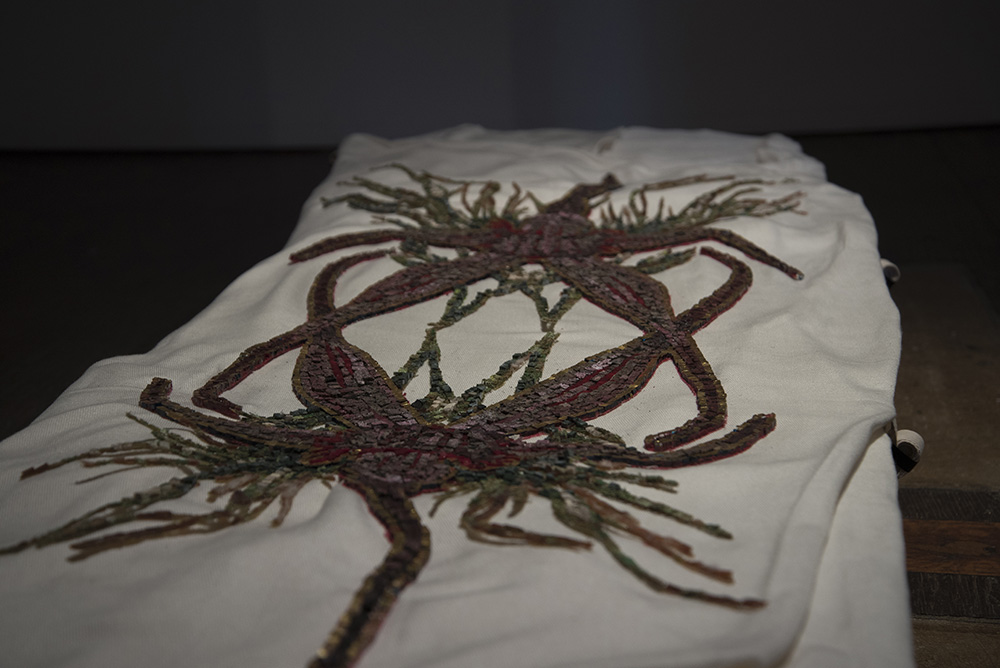