RKM is a multi-media architectural installation that was first exhibited at the 2015 Castlemaine State Festival (13th – 22nd March 2015), as part of the curated Visual Art Program.

The Castlemaine State Festival is a biennial ten-day multi-arts celebration that draws on the distinctive culture of the central Victorian goldfields region – of old and new, of the artistic and the agricultural, and its dynamic community strengths. The Festival showcases works from the region’s finest artists and performing arts companies, alongside those by national and international artists. (www.castlemainefestival.com.au)

During the 2015 Castlemaine State Festival the former Castlemaine Woollen Mills was utilised for a range of performance and exhibition uses. RKM was installed here within the former Baling Shed, a 19th century agri-industrial space. Over the ten day festival RKM was open every day and was attended by approximately 1400 local, interstate and international visitors.

RKM: Road Kill Mausoleum questions our desire to hold on to memory and life.

Memories are captured and preserved in every aspect of our lives. Everything we construct contains, records and transmits information about ourselves. Even our bodies contain and pass on genetic information.

The catalyst for RKM: Road Kill Mausoleum was the cruciform architectural footprint representing before and beyond. The intersection being the place for transformation.

Road Kill refers to the animals, ‘the others’ we are not conscious of. They are victims of collision.

The architectural form of RKM was inspired by the 6th century Mausoleum of Galla Placidia in Ravenna, Italy, a world heritage listed Byzantine monument described by UNESCO as “the earliest and best preserved of all mosaic monuments, and at the same time one of the most artistically perfect”.

The mosaics that cloak the upper walls and ceiling express the victory of eternal life over earthly mortality. A major feature of the Galla Placidia dome and arch mosaics is the starry firmament. 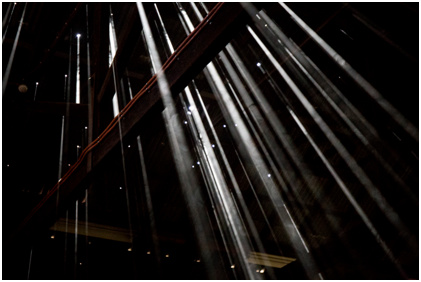 RKM sat beneath a roof perforated by thousands of wool baling clips released under pressure over many years, creating a natural starry firmament of sunlight beams shifting across the otherwise dark shed. Enhanced by haze, these shafts of light became physical connectors between floor and sky, inviting visitor attempts to touch, catch or contain the light. Amidst the air heavy with the scent of sandalwood and an ambient soundtrack of slowly dripping liquid, the richly layered atmosphere was simultaneously calming and unnerving; intriguing, mysterious and although clearly a secular space RKM evoked the sacred.

On entry to the shed visitors were met by the RKM Host and invited to be seated, to pause, reflect and adjust to the almost complete darkness.

Shoe protectors were worn to maintain the cleanliness of RKM’s 51 square metres of polished back granite flooring – mirrors to the sky. Upon entering RKM’s inner frame, a dizzying matrix of gridded white dots filled the walls; VHS spools, approximately 10,000 of them.

RKM was created using thousands of VHS tapes retrieved from the estate of Mr Alan Canning, a retired Melbourne schoolteacher. From the 1970’s until shortly before his death, Alan dedicated himself to recording TV shows that he believed would be of interest to his students. He amassed over 100,000 recordings, converting his Pascoe Vale home into a huge VHS archive. Ten years before he died, digital technology was widely used and analogue technology was becoming rapidly obsolete. The tapes used in RKM constitute less than 10 per cent of the original library; the rest has gone to landfill.

RKM remains a monument to obsolescence. 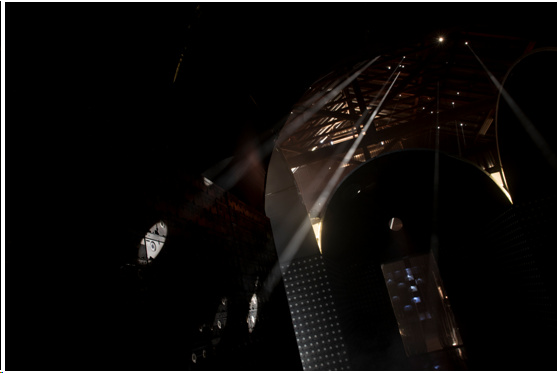 Artist Jilli Rose: “Many of us are so disconnected from nature that our only interaction with it is when we collide with animals on the roads. But we are animals ourselves, something we constantly dispute or forget. As we transcend our bodies and head towards a collective, global memory, “Amnesiac” reminds us of our inner animal, our ancestor mammal, scampering through the stars we came from, kicking up ancient memories.”

In the right bay of RKM, a large stone sarcophagus dominated the space. 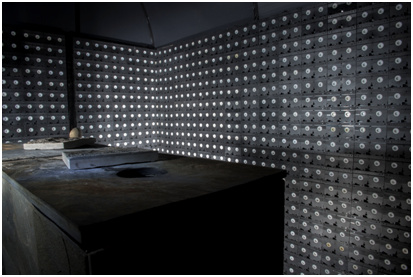 Artist Davide Michielin: “SARCOPHAGUS comes from the Greek phrase, lithos sarkophagos, lithos, meaning “stone”, sarx, “flesh”, and phagein “to eat”, which translates as “flesh-eating stone”. “neb-ankh” is the term originally used by the ancient Egyptians, translated as “lord of life”, or “possessor of life” but was also used to refer to one’s most prized possession. The tension between these two cultural interpretations inspired the installation. Humans have constructed a world around them based on what we perceive as having value. Shrines, buildings, monuments, roads, transport, speed. These beliefs have bound us to prioritise the needs of humanity, therefore neglect what lives beyond ourselves. This sarcophagus and its stone walls represent those beliefs. Incased within, are those affected.

Above the cruciform intersection within RKM, the absent dome permitted the entry of countless beams of light onto the walls and floor. This place, the centre of RKM was also the prime viewing point for the starry firmament reflected in the polished black granite floor. For the viewer looking down, the effect of this stellar reflection made one feel as though they were standing in the sky; a dizzying and compass-less state, the experience evocative of Laurie Anderson’s song lyric ‘The Night Flight from Houston’.
It was the night flight from Houston. Almost perfect visibility. You could see the lights from all the little Texas towns far below. And I was sitting next to a fifty-year old woman who had never been on a plane before. And her son had sent her a ticket and said:

Mom, you’ve raised ten kids; it’s time you got on a plane.

And she was sitting in a window seat staring out and she kept talking about the Big Dipper and that Little Dipper and pointing; and suddenly I realized that she thought we were in outer space looking down at the stars. And I said:

You know, I think those lights down there are the lights from little towns. 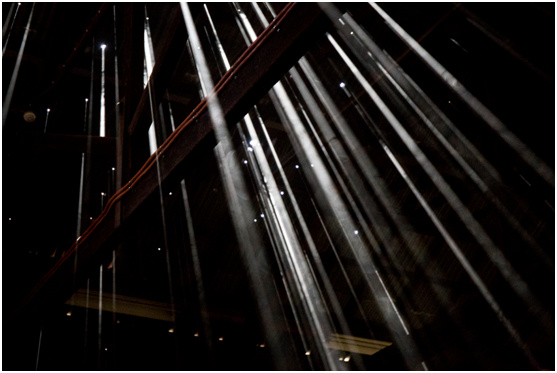 The third artwork installed within RKM was The Pieta, a glass and marble mosaic diptych on 2 car windscreens. Elevated and reminiscent of an altar centrepiece, The Pieta faced RKM’s entrance, signifying the pivot point of the installation. Pieta, meaning ‘pity or compassion’ is part of a largely sculptural art genre in which the Virgin Mary holds the lifeless body of her son, Jesus Christ. RKM’s The Pieta by Helen Bodycomb featured a young road kill joey sourced from a silver gelatin print taken by an anonymous local photographer. Immediately after the photographer’s car hit the mother kangaroo, the local vet (who was coincidentally on scene moments later) checked the pouch to see if a joey had survived. The photograph was taken while he was assessing whether or not the joey had survived. It had not.

Close to RKM’s shed exit was a set of vintage pigeonholes. Installed in these pigeon holes were a catalogued collection of road kill furs and trout fishing flies made from them. Artist Robert Macluarin (better known as a landscape painter than as a trout fisherman) has been collecting, cataloguing and making trout fishing flies from road kill fur for almost 40 years. 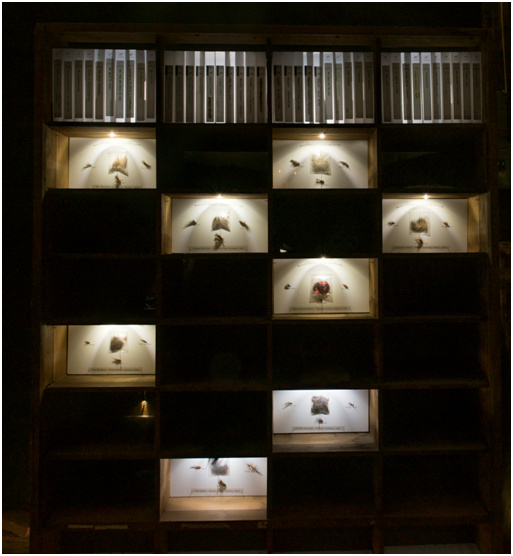 Prior to exiting the former baling shed visitors were invited to remove their shoe covers and to write in the RKM visitors book. Many lingered to drink in the multi sensorial atmosphere again, final attempts to grasp at light beams that yielded no mass. Untouchable light.

And then a groped exit through the heavy theatre black curtains, out to the blinding white of an abandoned industrial site. 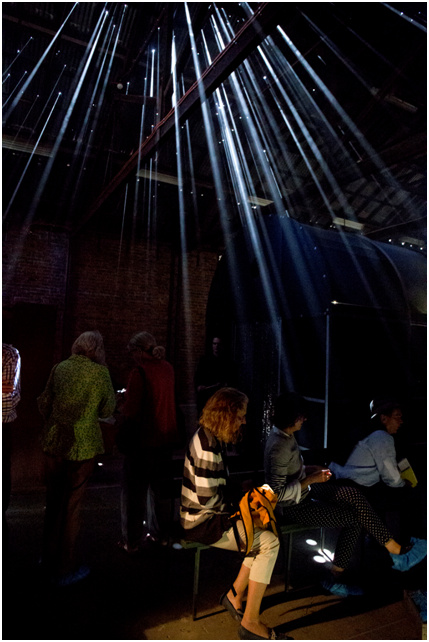 RKM COLLECTIVE WERE ASSISTED BY: