A Selection of my Favourite Mosaics

One day whilst René and I were working in the studio, he misheard something I said about a possible future mosaic we might make. René thought he heard me make reference to a Manga Medusa mosaic. 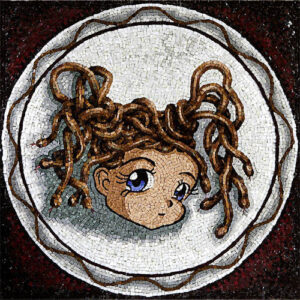 We were both amused by the thought of a hybrid of Medusa (the serpent-haired monster from Greek mythology, the sight of which turned all living things into stone) and a Manga figure (Japanese comic). This enticing fusion of ancient and modern culture has resulted in a work which I think of as ‘Roman Pop’. Manga Medusa (MM) was created for the 2006 touring exhibition ‘Mosaic Now; works from Italy and Australia’ (Bundoora Homestead Art Centre, Geelong Wool Museum, Warrnambool Art Gallery – Victoria and Mosman Art Gallery – NSW), which was put together by Bundoora Homestead and was curated by myself and eminent Australian mosaicist David Jack. She (MM) was packed up again for an even more distant adventure in 2011 when I was invited by the AIMC to participate in the International Guest Artists Exhibition at Ravenna Mosaico, Italy. MM spiked the attention of US arts reviewer Robert Conway Morris who wrote a considerable piece in the New York Times titled An Ancient Craft Gets a Bigger World Stage, making special reference to MM. Enjoying her brush with fame, Manga Medusa has been returned to her home on a lounge-room wall within a private collection in Adelaide, South Australia. 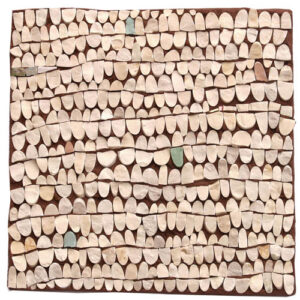 Working partnerships with other artists have always been very important to me, as is evident in much of my work. A highlight has been a collaborative partnership with René Schaefer who I first met and worked with on the Bellair Street Mosaic project in 1997. Our working life together continued until 2006 when I packed up the HBM studio and left Melbourne for a life in central Victoria. In 2003 Ren and I put together an exhibition largely of mosaic samplers called “Degustation”, for which I made Fingernails and Teeth. The exhibition was held in the 105 year old former kiln at Northcote Pottery (sadly, a building now in decay).

In Fingernails and Teeth hand-cut slivers of white pebble create stone strata reminiscent of fingernails and teeth. In 2003 the work was exhibited for a second time during a visit to Melbourne by renowned Texan mosaicist and author of numerous quality mosaic books – Sonia King. I was very gratified when Sonia bought the work for her private collection back in the States (where it remains). 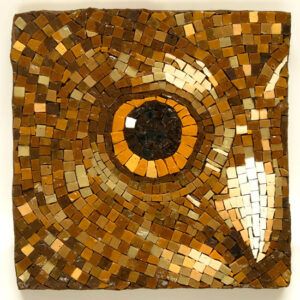 I live in a bush environment where I see and hear owls on an almost daily basis. A magical animal, I love them. This s one of the 25 cm works I made for the Degustation show back in 2003. It lives now on the wall of my father’s office in Melbourne. 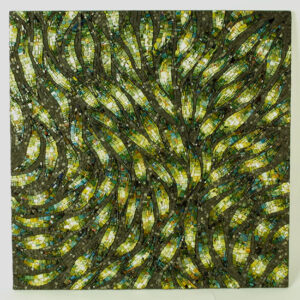 This work remains one of my old time faves, mostly because it was the ground-breaker for me when on residency at the Spilimbergo School in 2001. It was the first piece I ever made using smalti and marble cut traditionally using a hammer and hardie. The design was very much like the paintings I was making at art school in the late 1980’s, and then as a new graduate in the early ‘90’s. The title translates as ‘movement in the leaves’, and as such describes the action of wind or water current on foliage, rather than attempting to depict the foliage itself. The work is noe integrated within a garden in a private collection in Melbourne. 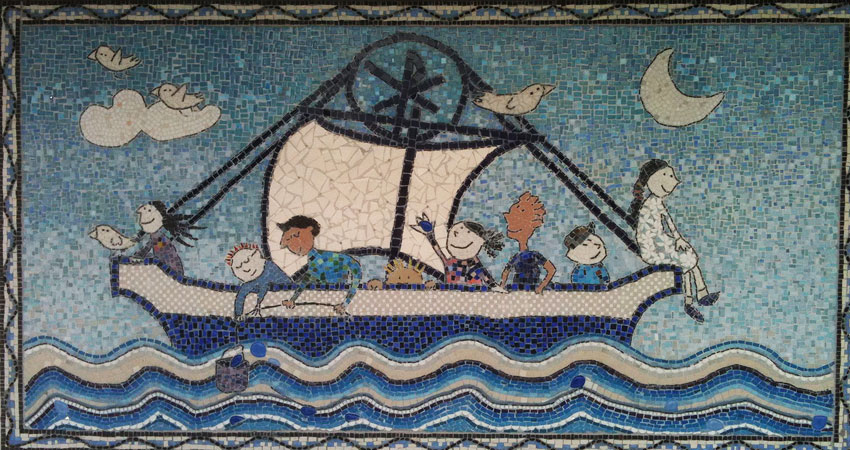 Occasionally I do projects with schools and made this piece in 2010/11 in workshops with children of St Peters Primary School in Keilor, Melbourne. Incorporating the school logo (the ship of St Peter), the work was designed by my old friend – wonderful children’s book illustrator Trace Balla. Measuring 2400 x 1200 mm and made using a range of glass and ceramic media, its actually quite an ambitious piece to construct with a bunch of kids aged 7-12. I love the cheerful honesty of it. The design depicts the kids sailing upon their good ship (the St Peter) upon the sea of life. No grown-ups in view, just fun and wonderment to be had – with bounty from the seas to be gathered up.