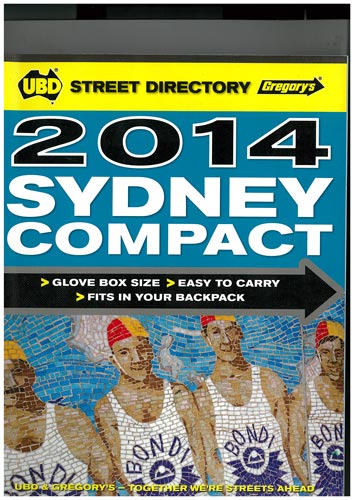 Its flattering to have an out of the blue phone call from a publisher, asking permission to use one of your artworks to grace the cover of a widely distributed publication (even if it is ‘just’ a street directory).

I was delighted that the image chosen is a crop of the iconic Bondi Surf Club lifesavers by Enver Camdal and me, part of a 27 piece Sydney street furniture installation we made way back in 1998. The Bondi Surf Bathers’ Life Saving Club (Bondi Surf Club) is officially recognised as the oldest surf lifesaving club in the world and holds an indelible position in Australian history.

I am most thrilled though that the publisher’s crop includes the Turkish lifesaver of Enver’s making (far left). Enver ‘Turkish-ised’ one of the lifesavers, giving him a hairy chest and moustache, possibly even a portrait of Ataturk – the Father of modern Turkey. At the time we made these mosaics this was a somewhat cheeky act, given the valorous nature of life saving culture and the ANZAC legends built around the numerous Bondi Club members who fought at Gallipoli.

Ataturk’s own tribute to the ANZACS killed at Gelibolu (Gallipoli):

“Those heroes that shed their blood and lost their lives … You are now lying in the soil of a friendly country. Therefore rest in peace. There is no difference between the Johnnies and the Mehmets to us. Where they lie side by side now here in this country of ours … You mothers, who sent their sons from faraway countries wipe away the tears. Your sons are now lying in our bosom and are in peace after having lost their lives on this land. They have become our sons as well.”

A century later, it seems a poetic and potent gesture of genuine peace and reconciliation that Enver’s Turkish life-saver features as he does, both on the bench seat and now on the cover of the 2014 Sydney street directory.